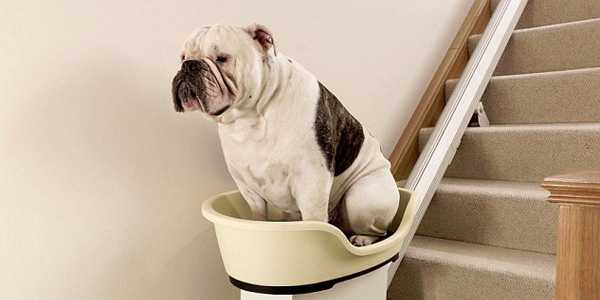 With the exception of the Mediterranean minnow that is Malta, Britain is the fattest nation in Europe* – and worryingly our canine companions are following firmly in our footsteps.

Of the 8.3 million dogs in the UK**, one in three are now obese, but according to MORE TH>N Pet Insurance, the situation could be a lot worse in ten years time. If obesity levels continue to rise at the current rate, over half of all pooches will be severely overweight (52 per cent) by 2022 – and unable to carry out basic tasks, like climbing a set of stairs, without putting serious pressure on their hearts.

As a warning to pet owners, MORE TH>N has designed a prototype of the world’s first stair lift for dogs, a product that could become common in British homes unless we change our approach to our dogs diets.

Based on a conventional stair lift, the ‘Stair of the Dog 2022’ concept has been in development for the best part of six months and has a number of high tech mutt-modifications that make it dog friendly. As well as a comfy basket for dogs to sit in during the stair elevation stage, it features an electronic retractable platform – activated by a paw recognition button – to take said dog from floor to basket level.

While the prototype ‘Stair of the Dog 2022’ is sure to raise a few smiles, the statistics show just how serious an issue dog obesity has become in the UK; already two leading national retailers have expressed an interest in manufacturing and selling the product.

Commenting on the prototype, John Ellenger, Head of MORE TH>N Pet Insurance, said: “It’s extremely worrying to think that 52 per cent of all dogs in the UK could be obese in 10 years time. At the moment we take it for granted that our dogs can retrieve balls and climb a set of stairs without putting their health at risk but this might not always be the case.

“We’re undoubtedly a nation of dog lovers, but time and again we see people sharing their love in an unhealthy way, mostly through feeding their dogs inappropriate and fat-laden foods. A stair lift for dogs is a vision of the future we really don’t want to see become a reality”.

TV vet Joe Inglis said, “The stair lift for dogs is an innovative product but ultimately it’s a sad state of affairs that we’re even talking about it. Fat dogs might look cute and cuddly but obesity is a serious issue with very serious consequences – besides restricted movement, heart disease and arthritis, it can result in liver damage and diabetes too”.

To prevent pooches piling on the pounds, Joe Inglis and MORE TH>N recommends dog owners do the following: