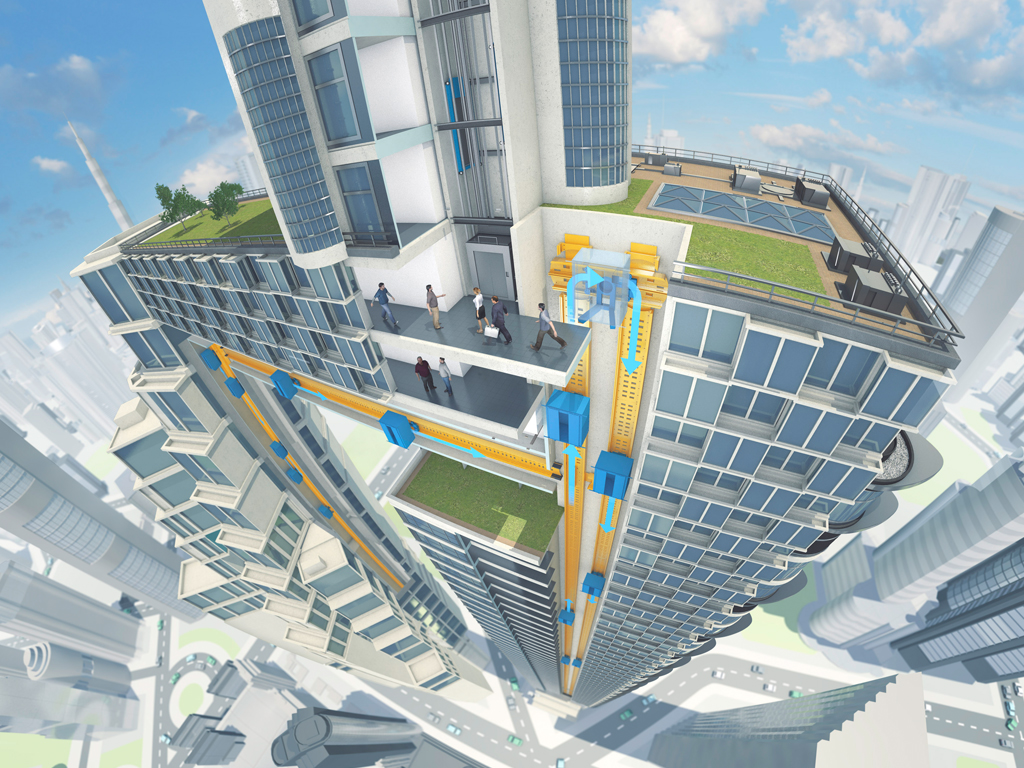 The era of the rope-dependent elevator is now over, 160 years after its invention. ThyssenKrupp places linear motors in elevator cabins, transforming conventional elevator transportation in vertical metro systems. MULTI elevator technology increases transport capacities and efficiency while reducing the elevator footprint and peak loads from the power supply in buildings. Several cabins in the same shaft moving vertically and horizontally will permit buildings to adopt different heights, shapes, and purposes. The first MULTI rope-free elevator unit will be in tests by 2016.

Presented today, MULTI is ThyssenKrupp’s latest offering in its extensive repertoire of elevator technologies, representing a landmark revolution in the elevator industry and a new and efficient transport solution for mid and high-rise buildings. Now, the long-pursued dream of operating multiple cabins in the same elevator shaft is made possible by applying the linear motor technology of the magnetic levitation train Transrapid to the elevator industry. MULTI will transform how people move inside buildings, just as the recently introduced ThyssenKrupp’s ACCEL, which also applies the same linear motor technology, is set to transform mobility between short distances in cities and airports.

In a manner similar to a metro system operation, the MULTI design can incorporate various self-propelled elevator cabins per shaft running in a loop, increasing the shaft transport capacity by up to 50% making it possible to reduce the elevator footprint in buildings by as much as 50%.

Using no cables at all, a multi-level brake system, and inductive power transfers from shaft to cabin, MULTI requires smaller shafts than conventional elevators, and can increase a building’s usable area by up to 25%, considering that, depending on the size of the building, current elevator-escalator footprints can occupy up to 40% of the building’s floor space. The overall increase in efficiency also translates into a lower requirement for escalators and additional elevator shafts, resulting in significant construction cost savings as well as a multiplication of rent revenues from increased usable space.

The significant extra space available is only one of MULTI’s advantages. Although the ideal building height for MULTI installations starts at 300 metres, this system is not constrained by a building’s height. Building design will no longer be limited by the height or vertical alignment of elevator shafts, opening possibilities to architects and building developers they have never imagined possible.

MULTI is based on the concept of ThyssenKrupp TWIN’s control system and safety features, but includes new features such as new and lightweight materials for cabins and doors, resulting in a 50% weight reduction as compared to standard elevators, as well as a new linear drive – using one motor for horizontal and vertical movements.

Commenting on this momentous breakthrough in the company’s history of innovations at the global headquarters of ThyssenKrupp in Essen, Germany, Andreas Schierenbeck, CEO of ThyssenKrupp Elevator AG said, “As the nature of building constructions evolve, it is also necessary to adapt elevator systems to better suit the requirements of buildings and high volumes of passengers. From the one dimensional vertical arrangement to a two dimensional horizontal/vertical arrangement with more than one or two cabins operating in each shaft, MULTI represents a proud moment in ThyssenKrupp’s history of presenting cutting-edge transport technologies that best serve current mobility needs”.

Operating on the basic premise of a circular system, such as a paternoster, MULTI consists of various cabins running in a loop at a targeted speed of 5 m/s (985fpm), enabling passengers to have near-constant access to an elevator cabin every 15 to 30 seconds, with a transfer stop every 50 metres.

Schierenbeck said, “Per year, New York City office workers spend a cumulative amount of 16.6 years waiting for elevators, and 5.9 years in the elevators. This data provides how imperative it is to increase the availability of elevators.”

A 2013 analysis of two-dimensional elevator traffic systems likens the present use of one cabin per elevator shaft to using an entire railway line between two cites to operate a single train – clearly a waste of resources. By combining groundbreaking technology with a simple operation concept and convenience of passenger use, ThyssenKrupp’s MULTI will transform the idea of a flexible number of cars per shaft from a distant vision for the future into a reality.

“To get this groundbreaking product onto the market our new test tower in Rottweil, Germany, provides the perfect test and certification environment. The tower is set to be completed at the end of 2016, and by this time, we aim to have a running prototype of MULTI”, Schierenbeck adds.

While more than half the world’s population already lives in urban areas, there is expected to be a 2.5 billion increase in urban population numbers by 2050. With severe restrictions on space, mid to high- rise developments have proved to be the most economically and environmentally viable developments to accommodate these rapidly growing urban populations; in addition to occupying less soil, essential to secure green areas for the city, they also allow for centralized intelligent control of energy.

Besides the number of tall buildings increasing, their average height is also surpassing past expectations. In 2000, the average height of the world’s 50 tallest buildings was 315 metres, while in 2013, that same average reached 390 metres; a 25% increase in just one decade.

However, while the means to build taller buildings exists, without the ability to efficiently move the inhabitants of buildings between floors the functionality of skyscrapers is limited, translating into loss of revenues if residential and commercial spaces on the top-most floors cannot be sold.

A project on elevator travel done by students of Columbia University found that in 2010, New York City office workers spent a cumulative amount of 16.6 years waiting for elevators, and 5.9 years in the elevators, indicating that it is vital to increase the availability and efficiency of elevators.

A 2013 paper on the analysis of two-dimensional elevator traffic systems also likens the prevailing use of one cabin per elevator shaft to using an entire railway line between two cites to operate a single train – a clear waste of resources.

Therefore, as the nature of building construction evolves, it is imperative for the elevator industry to adapt its technologies to meet current efficiency demands– from the prevalent one-dimensional vertical arrangement to a two-dimensional horizontal/vertical arrangement, with more than one cabin operating in each shaft.

In this regard, TWIN elevators are already an advancement from the single cabin system, improving capacities as well as operational efficiency. However, an increase in the number of cabins in this system is restricted by the use of complicated cable arrangements, and the system requires that one car must always be above the other. Safety concerns also prevented earlier advancements in the use of rope- less elevators. This is where linear drives gain a massive advantage, eliminating the use of ropes and enabling the use of more than one car in the same shaft.

MULTI is ThyssenKrupp’s latest offering in its extensive repertoire of elevator technologies, and represents a landmark revolution in the elevator industry. Realising the long-pursued dream of operating multiple cars in the same elevator shaft, the system will also include horizontal shaft-changing cabin systems.

MULTI’s research and development phase has reached the point of building the first model and prototype, and ThyssenKrupp’s new test tower in Rottweil provides the perfect test and certification environment to get this ground-breaking product onto the market. The test tower will be completed at the end of 2016, and by this time, the company aims to have a running MULTI prototype.

Operating on the basic premise of a circular system, such as a paternoster, MULTI will use rope-less linear technology to operate elevators, and a single loop can incorporate various cabins. With a targeted speed of 5 m/s, the system will enable near-constant access to an elevator cabin every 15 to 30 seconds, with a transfer stop every 50 metres.

Passengers will enjoy reduced wait times, and the option of double entries on the ground floor improves ease of access in large buildings.

MULTI also offers much higher capacities and faster and more comfortable movement as compared with high-speed elevators, which are limited by the effects of pressure on the human body, with many people experiencing discomfort while travelling in elevators at speeds higher than 10 m/s.

Although the ideal building height for MULTI installations starts at 300 metres, this system is not constrained by a building’s height. With no ropes, a multi-level brake system, and inductive power transfers from shaft to cabin, MULTI requires smaller shafts of a mere 6 sqm, while other technologies such the TWIN require about 9 sqm. This can signify significant cost savings for the building’s developer. The overall increase in efficiency also translates into a reduced need for escalators and elevator shafts, thereby decreasing a building’s elevator footprint by up to 50%, and providing further usable floor space and revenues to building owners.

MULTI applies the concept of the TWIN’s control system and safety features, but includes new elements such as new and lightweight carbon composite materials for cabins and doors, weighing a mere 50 kg instead of 300 kg in standard elevators, resulting in an overall 50% weight reduction as compared to standard technologies. A new linear drive also enables one single motor to be sufficient to perform horizontal and vertical movements, and an exchanger moves cabins from one shaft to the other.

By combining ground-breaking technology with a simple operation concept and convenience of passenger use, ThyssenKrupp’s MULTI has transformed the idea of a flexible number of cars per shaft from a distant vision for the future into a reality.

Underground Storage with Elevator for Your Bicycles