Home Elevator Safety In case of fire use elevator!

Any regular elevator user in North America is likely to be familiar with a particular sign posted in all elevator lobbies warning the public not to use elevators in case of a fire. These ubiquitous signs are mandated by the ASME A17.1/CSA B44 Safety Code for Elevators and Escalators, the International Code Council’s International Building Code used in most of the United States, the National Building Code of Canada, and through numerous local codes and ordinances. These signs have done their job well—rarely does one see building occupants jamming the “down” button in elevator lobbies while a fire alarm blares throughout a building.

The reasons behind prohibiting the use of elevators in a fire were based on historical concerns that have become modern anachronisms in new buildings. Due to today’s advances in building design and elevator technology, working elevators don’t become inoperable in fire situations, trapping passengers as the environment becomes untenable. There isn’t necessarily a serious loss of power to the building or a shutdown of the elevator system due to intrusion of water into the elevator shafts, capturing passengers engulfed by smoke or fire.

Ironically, there have been instances that predate our modern building and safety codes in which elevators have saved countless lives in fatal fire conditions. For example, the 1911 Triangle Shirtwaist Factory fire in Manhattan was New York City’s deadliest industrial fire. One hundred forty-six garment workers died from fire, smoke inhalation or falling or jumping to their deaths from the 10-story windows. During the disaster, two elevator operators who could assess the conditions of the conflagration chose to stay at their jobs, making trips to the eighth and tenth floors to carry an estimated 150 workers to safety —approximately half the number of survivors.

By mid-century, elevator operators were giving way to automatic operation by elevator passengers, directing their desired destination but lacking any knowledge of whether an elevator was safe in a fire situation. In the 1970s, a number of fatalities occurred in high-rise building fires where people were trapped in smoke-filled hoistways or taken to a floor where a fire was active.

The Elevator Safety Code responded to this hazard by introducing Phase I firefighter service as a requirement for new elevators in the late 1970s. This service automatically returns elevators to a main floor and placed out of service when smoke is detected in an elevator hoistway, lobby or machine room.

In the 1980s, views on using elevators to evacuate building occupants in emergency situations began to evolve. As accessibility for persons with disabilities became a social goal – and eventually a civil right under the Americans with Disabilities Act of 1990 – policy makers called for changes to provide evacuation for everyone. For persons using wheelchairs or those with a limited capacity to use exit stairs, elevators are really the only viable option in emergency circumstances. Still, using elevators to evacuate non-disabled building occupants in building fires remained an idea outside of the norm. 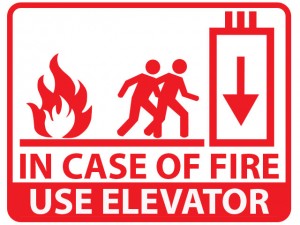 All of this changed on September 11, 2001 with the attack on the World Trade Center. Nearly 3,000 died as the Twin Towers collapsed, with desperate office workers leaping to their death from some 90 stories in the sky. Many have theorized that had the building elevators remained operational as a means to evacuate the upper stories of the buildings, more lives could have been saved. In fact, in the 18 minutes after the North Tower was struck, hundreds of workers chose to evacuate the South Tower and reach safety on the ground floor by using the building’s elevators.

In 2002, the U.S. National Institute of Standards and Technology (NIST) began to study the evacuation issues related to the attack in its World Trade Center Disaster Study. Shortly after, the model code groups held a “Workshop on the Use of Elevators in Fires and Other Emergencies” in March 2004, in Atlanta, Georgia. The workshop was co-sponsored by American Society of Mechanical Engineers (ASME), National Institute of Standards and Technology (NIST), International Code Council (ICC), National Fire Protection Association (NFPA), U.S. Access Board, and the International Association of Fire Fighters (IAFF). As a result, the ASME A17 Elevator Standards Committee established a Task Group on the use of elevators for occupant evacuation. Within nine years the NFPA and ICC building codes and the ASME A17.1/CSA B44 Elevator Code, in conjunction with requirements in the fire alarm code, etc. all had new provisions. These permitted extremely high-rise buildings to use elevator systems to safely remove building occupants from the upper stories of a building during fire. In fact, the International Building Code has incentives for installing these types of elevators where a building exceeds 420 feet in height.

Professionals now recognize that properly designed buildings with occupant evacuation elevators can provide the safest and quickest way to get people to safety in fires and other emergency conditions. These specially designed buildings protect elevator lobbies, hoistways and machine rooms from the intrusion of fire, smoke and water. Requirements for compartmentalization, fire-resistive construction, and sprinkler protection make buildings safer and provide additional safeguards for persons who cannot use exit stairs to evacuate a fire floor or building. With extremely high-rise construction in particular, using elevators versus the exit stairs can shave hours off of the time it takes for building occupants to move from close proximity to a fire to the safety of the outdoors.

Just as elevator technology has come a long way since the “Do Not Ride” days, standard fire safety precautions have as well. Most high-rise buildings now have codes that require designated floor wardens and searchers to assist in the efficient evacuation of fellow occupants. Monthly fire drills and equipment checks are also commonplace.

As the Chicago condominium fire fatality just two short years ago reminds us, we still have work to do. However, once the technology, building codes, and education all fall into place, the public will start noticing a new crop of signs popping up in the lobbies of high-rise and extremely high-rise buildings. “In case of fire, do not use elevator” will slowly be replaced by “In case of fire, use elevator”

Safety Week at Kone with Max and Bob

The Psychology of Elevator Behavior Explained

Safety of Home Elevators Under Investigation

ElevatorToday.com - November 24, 2019 0
The FlexStep stairlift is designed to function both as an ordinary staircase and as a wheelchair lift. Developed and manufactured by Liftup.dk,...

thyssenkrupp launches virtual showrooms across Asia and the Middle East

The Psychology of Elevator Behavior Explained